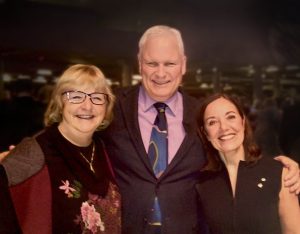 On November 15, Lin Ward and Al Pace, founders of Canoe North Adventures, were thrilled to be made Fellows of the College of Fellows of the Royal Canadian Geographical Society. The main criteria for becoming a Fellow is to tirelessly promote Canada to Canadians as well as to support the interests of the RCGS. Canoe North Adventures Alumni, Wendy Cecil is currently serving the RCGS as Vice-President and is seen here with Lin and Al at the Fellows Dinner, held at the Canadian War Museum, Ottawa.

The College of Fellows

Considered the governing body of The Royal Canadian Geographical Society, the College of Fellows brings together individuals who share the Society’s abiding commitment to Canada, who support its mandate of making Canada better known and its educational mission of expanding geographic knowledge and literacy. Once a year, Fellows are called upon during their Annual General Meeting to receive and approve reports from the President and Treasurer. They also elect Officers and governors of the Society and, later the same day, come together at the Annual Dinner of the College of Fellows in a celebration of the Society’s accomplishments. Year round, Fellows raise the profile of the Society in their respective communities, offer guidance and advice to the Society and, however they are able, help organize and participate in the Society’s programs and activities. Engagement on the part of Fellows takes many different forms, and supporting the Society financially is but one of them.

A brief history of the College of Fellows

As an educational organization, the Society looked to the academy and elected university presidents and chairs of science departments as Fellows. The Society has a great affinity for explorers, and Vilhjalmur Stefansson, Lord Edward Shackleton, Henry Larson, Rosita Forbes and Diamond Jenness were some of its first Fellows. In the same vein, the Society currently counts among its Fellows astronauts Steven Maclean, Jeremy Hansen and Roberta Bondar, and explorers Bernard Voyer, Wade Davis, Jill Heinerth and Sir Christopher Ondaatje. The College of Fellows encapsulates important values: the determination to build, the courage to explore new avenues and the steadfast love of country. In 1930 the Society named its first Fellows. Among the earliest were Frederick G. Banting, Diamond Jenness and A.Y. Jackson. They were joined by Canada’s foremost scientists and researchers in geography, anthropology, engineering and history, in both private and public sectors.