Canoe North Adventures is grateful for ongoing support from the Government of the Northwest Territories (Industry, Tourism and Investment) and the Canadian Northern Economic Development Agency. Thank you! 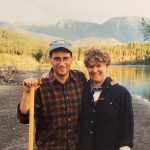 In the very early days of Canoe North Adventures, our canoe trips explored rivers of the Yukon Territory and the South MacMillan River was one of our favourites. In 1997, a young couple, Kathryn Moore and Will Leffler joined us on a South Mac trip for their Honeymoon Adventure! This was uncharted territory for Lin and me! We felt an extra responsibility to launch this young couple on an epic if not romantic adventure. Kate’s Aunt and Uncle, Kathy and David Richardson joined us on the Big Salmon River in 1995 and this was the connection that introduced Kathryn and Will to Canoe North Adventures.

Kate and Will were comfortable in a canoe but neither had extensive whitewater experience and the South MacMillan had miles of technical rock-garden type rapids. Kate was my bow partner and within hours had perfected her draws and crossbow draws like a pro. As we were the lead canoe, this played nicely into Kate’s assumed roll in her young marriage – calling all the shots!

Meanwhile, somewhere in the middle of our pack of five canoes, Lin and Will (the two intellectuals!) were working out exactly which “left” they were talking about! This was only Lin’s second trip paddling in the stern and her very first trip running ultra-technical rapids and Will, who was working as a young Pension Policy Analyst was not used to making split second decisions that involved hitting “V’s, avoiding ROCKS and bracing through standing waves! Suffice it to say that Lin and Will did find their paddling groove by about Day-3 of the trip but only after a few mandatory tutorials during lunch breaks!

On the second last night of the trip, we were camped on a beautiful sand beach just below Needle Rock on the Pelly River. We decided to celebrate Kate and Will’s honeymoon by re-enacting their wedding! Everyone scattered and began preparations – there was a gift-table, so we all made crafts and artifacts for the bride and groom. Ross Martin caught a huge salmon, so we made a big fire on the beach, wrapped the fish in tinfoil, dug a trench and chucked in the fish buried with hot coals. An altar was erected with an over-turned canoe. Skits were performed in full costume. Finally, the bride appeared wearing MEC quick dry pants and a bug-jacket complete with a head-net veil. Ross walked the bride across the beach to the canoe altar. Wedding vows were exchanged with Kevin Weeres presiding over the ceremony. Will lifted Kate’s veil and the bride and groom kissed after which we immediately dug-up the fully baked salmon and picked the bones clean right up to the eyeballs. We were starving!

Jill Weeres was a wizard on the ukulele. She knew how to call a square dance, so, on a clear patch of hard-packed damp sand, the square-danced commenced. Jill shouted out instructions and we grabbed our partners, locked arms, and took two-steps forward and two-steps back. It was a wild scene of laughter, howling and celebrating at the edge of a pristine wilderness river. When the square-dance ended, Jill shouted, “Nobody move!” Our group of nine dancers had left a spectacular pattern in the damp sand that looked exactly like a crop-circle or perhaps the footprint left by a lunar-landing module. We carefully extricated ourselves from the beach dance floor leaving this mysterious footprint in the sand for the next group of canoeists to decipher.

At 9pm, we moved to the river’s edge and boarded our raft of five firmly lashed canoes under the golden rays of the midnight sun. We headed downstream at a good clip with the strong current of the Pelly River. Our plan was to drift and paddle sixty kms to Pelly Crossing where the trip concluded, arriving in the wee hours of the morning. Having witnessed Kate and Will’s wedding vows, dined on fresh-baked salmon, and participated in a “once-in-a-life-time” square-dance, we thought the evening would slowly wind down with campfire songs and a handful of GORP as we drifted downstream on the Pelly River. Well, as it played out, our evening of love and romance under the midnight sun was just getting ramped up! Just a few minutes into our barge trip, a grizzly bear stepped out of the bush onto a sandbar in full view, with the midnight sun super-charging the bear’s furry coat in a glorious halo. By 10pm the sky darkened as the sun dipped below the horizon and suddenly, a blaze of light streaked across the sky right across our bow! A school-bus sized flaming meteorite crashed into the bush within a few miles of our drifting flotilla. At midnight, a sliver of green light emerged out of the horizon and within minutes, our first ever encounter seeing Aurora Borealis played out in spectacular glory.

The excitement of the wedding and all of the memory-for-life events that unfolded during this extra-special long day, finally had us yawning and napping and snuggling in our sleeping bags on the barge as a chill had fallen over the Pelly River. By 2am, Will emerged and was embarrassed to announce that he had to pee! There was no way to land the big barge so Will moved to the starboard side of the barge and attempted to pee – but to no avail. There was some snickering and joking coming from the girls’ camp and of course, you can’t pee when you are laughing while keeping your balance standing on the gunnels of a drifting canoe! Eventually, Will was successful and within minutes, all of the other guys followed suit, so we all had our moment of stage fright in front of the girls. Mysteriously, none of the girls had to pee during the 7-hour drift to Pelly Crossing. We men were absolutely gob-smacked that women could hang on for seven hours without having to pee – go figure!

That South MacMillan trip, we shared so many years ago, inspired countless memories infused with the extra-special sharing of Kate and Will’s young love and spirit of adventure. Imagine our delight when Kate and Will called last week from Ottawa to book their 25th Wedding Anniversary canoe trip on the Keele River with Canoe North Adventures! We are so honoured and delighted to have Kate and Will join our group as seasoned alumni. Kate is currently the Director of Government Relations at the University of Ottawa and Will is Senior Director of Group Insurance Plans at Treasury Board. Their daughters, Claire (age 21) and Annie (age 19) are university students at Acadia and Mountain Allison. We cannot promise Kate and Will a square-dance or a grizzly bear encounter, but we can promise them a grand adventure in the face of stunning wilderness that reaches deep into your soul and changes you … forever.

Footnote: Some years ago, the truth was revealed about that night on the barge when the boys were duped into believing that the girls never had to pee! Apparently, there was a secret signal and whenever one of the girls had to pee, a song would start-up and the girl in need would shimmy to the back of the barge and pee off the back end! Priceless!

Turn your gaze north – the Wild is Calling! As the pandemic fog lifts across the Canadian landscape, our pristine northern lakes and rivers are coming into clear view. We encourage you to get outside, breath deep, experience nature and embrace your wild side. Looking ahead to 2022, consider joining one of our rejuvenating wilderness canoe or raft trips in Yukon or Northwest Territories. Imagine the sounds of laughter coming from the campfire during a multi-generational family canoe trip – the enfettered freedom away from devices and protocols – an awesome way to reconnect through a shared Canadian adventure! Canoe North Adventures is your escape hatch to feeling alive and free-spirited and connecting to the natural world.

At Canoe North Adventures, we are proud to introduce five of our favourite canoe expeditions in Canada’s far north. These rivers are brimming with magic and mystery – they hold secrets that will reach deep into your soul and change you – forever! Our small groups are carefully selected for maximum enjoyment and rivers are matched with your appropriate level of skill and experience. From the Mackenzie Mountains to the Arctic Coast, from the Klondike Gold Rush to the Legends of Nahanni – we are excited to share the secrets of these amazing rivers.